Day #18 The first 100 days: A journey to health and wellness 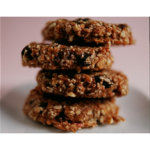 We mentioned a few days ago, we are experimenting with some healthy recipes. Here are a few that we love:

2 pounds apples, cored and peeled (5-6 apples such as Fuji or Gala)

½ – 1 cup of chopped dates (recipe calls for raisins but we didn’t have any.)

Press the mixture into about 20 round, flat cookies (about 3 inches thick) with your hands. Lay them on dehydrator sheets. Dehydrate at 105F for 24 hours.

(If you do not have a dehydrator, you can put them in your oven on the lowest setting, approx. 200F for 3-4 hours.)

After making the cookies, there was about 1 cup of juices leftover. Instead of throwing it away we decided to try and make another dessert. We cooked quinoa and poured the juices over top and also added 1 diced apple, 1 diced pear and about 1 cup of unsweetened almond milk. It was very good, but we agreed it tasted more like apple cinnamon oatmeal breakfast than a dessert. We Googled “apple quinoa breakfast” to find an actual recipe so that we can recreate it and also share with you.

This was about as close as we could get:

Bring the quinoa, almond milk, and applesauce to a boil in medium pot. Reduce to simmer and continue to cook for 15 minutes until liquid is absorbed. Stir in apple pie spice, vanilla and salt. Pour into bowls and top with shredded apples and a drizzle of almond butter if desired.

We hope you enjoy it as much as we did.