Today, we use our cell phones and smart phones a lot more often than when the safety standards were written 30 years ago, and we’re exposing ourselves to far more radiation than anyone could ever have imagined.

Introducing the R2L – Radiation to Light 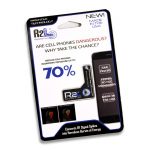 FEATURES OF THE R2L

THE R2L WORKS BECAUSE…

it takes advantage of the laws of the “conservation of energy”.  By changing the type of energy “radiation to light” (bad to good) it reduces the amount of bad (microwave) energy that remains leaving only enough so as to not drop the call or data. There are devices out there that claim to shield the user from cell phone radiation but these do not address the nature of energy. If you simply shield or cover the antenna all you are doing is redirecting (reflecting) the energy. This is the case in products such as the DefenderShield. For example, the makers of X-ray machines protect the operator by the use of a dense material like lead to protect you from the X-ray energy.  The problem with shielding is for it to properly work on a cell phone, the whole antenna would have to be covered up. If that were the case, the cell phone would not work (could not connect).  With devices like the DefenderShield, the energy is still there at the same strength, it is just redirected to somewhere else. In the case of a cell phone, the energy is redirected to your hand or another part of your head or body. Instead of using lead, they use a carbon based material or other dense material such as a dense metal. Some also claim their device can absorb the energy. In the case of radiation, the absorbing material to truly absorb the energy, would ionically have to change; that is the material would have to mutate. This process is call ionization. Any other absorbing method would have to drain the energy in order to continue to absorb. Imagine cleaning a large water spill on a table with a small sponge. The sponge would quickly become saturated. Once it becomes saturated, it no longer will absorb the water. The sponge would need to be drained of the stored water into a drain or bucket before the sponge can be returned to the spill and absorb more water again. The R2L uses the LED light to drain the temporarily stored energy so the R2L can collect more energy. That is why the R2L lights up releasing this temporary energy. This cycle continues as long as the cell phone is transmitting.